The rustic atmosphere of the neighborhood and the intermittent rumblings of vehicles greeted me as I stepped outside of Tiong Bahru Plaza. Glancing back and forth on the map, I finally figured out the direction to the Oh! Open House. As I walked into the alley leading into the quieter areas of the place, numerous HDB buildings of the most traditional kind spread across the terrain, offering an entirely different feel. When I reached the destination, perspiring slightly from the unfamiliar walk through the reserved, subdued 1970s-like housing territory, I followed the signs on the wall that read “This way to buy tickets” which led me up the stairs of the community centre.

The noise grew louder as I neared the second level. What greeted me was a crowd of about 150 people queuing up in the hall, with signposts reading “4-5pm”, “5-6pm” dotting the space, and a sudden realization struck me that it was a guided tour and I had to patiently wait for my turn amidst the crowd.

I took a red seat from the back of the hall and lined up with the rest of the visitors. I sat beside a group of three French women (I know they are French from their accented spoken English) while reading the introductory passage of each of the artists. As the queue moved along, one of the women said to me, “Sorry, I think you came after us” and they occupied the space in front of me. Following that, a group of Singaporeans moved up towards me, and the menacing woman accused me of cutting queue, and I retorted saying I was here first but that didn’t quite convince her, so I had to move behind those three. Fortunately, a lovey-dovey couple having their attention fixed to each other followed and I discreetly moved between them and the Singaporean group, reckoning that they wouldn’t quite mind my ‘intrusion’ as they were more affixed on their amorous displays than my presence, while making sure that I was really IN the queue. As tours of 15 to 20 people moved out of the hall every 15 minutes, I felt a little more relieved, as finally, our guide ushered us away from the hall.

What a wonderful start to the event. This better be good, I told myself, as I trudged along.

I was expecting artworks to evoke responses that concern the area of Tiong Bahru, as the theme of the Open House suggested, something that I thought would be difficult for the artists to achieve as the neighborhood seemed to be rather reclusive and I have not discerned its socio-artistic values, except for its traditional feel of the residential areas that perhaps draw out memories from the older generation. 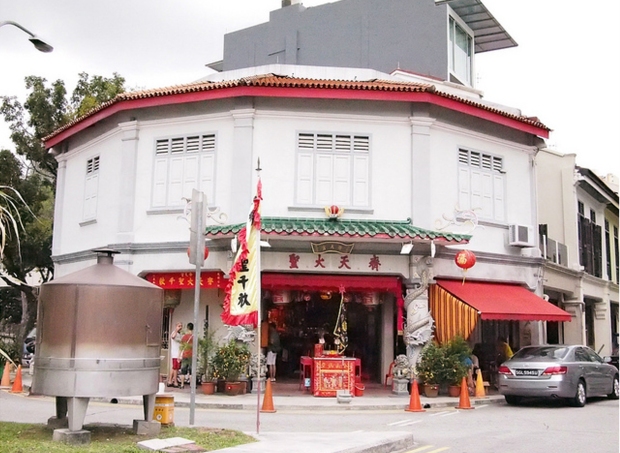 Our group came to a temple area located at a junction, and the piece Matter and Principle by Gilles Massot and Mark Wong. I peeped into the temple interior, which showed altars and joss sticks dedicated to the Monkey God, while the group stood before an installation video of the Monkey God’s 72 Transformations, and everyday objects such as a Chinese lantern, soy sauce and pepper for eggs, a public phone, and printed on cards of different sizes lined up neatly on the floor. Mr. Gilles Massot stood behind a grilled steel gate to answer any queries from visitors. On the surface, the installation seemed to allude to mere stories of the protagonist and the temple being a place of worship; then I began to question the significance of the subject matter which Massot and Wong chose. The sound of the video installation was directly based on an interview with Mr. Goh, the second son of the medium who started the temple in 1920, and the piece was not directly focused on merely the temple and the Monkey God.[1]

As the guide rambled on from her notes, I thought of the role of the temple in the ongoing gentrification process and its position in the ever-changing locale. The transformation of the older generation of spiritual Chinese was gradually replaced by a newer, modern generation and an irrevocable dissolving of Chinese tradition in the community became apparent.

The extent of reshaping of the local landscape in the housing estates and constant renewal of not merely the physical environment but the process of the younger working class, more concerned about material wealth over intangible religion, is taking its toll on the significance of temple worship and Chinese traditions. The relevance of the temple’s presence and purpose was questioned as Massot and Wong sought to remind visitors of Chinese culture. The video and objects played a different role as they highlighted indirectly the deeper issues involved. The subjects were poignantly photographed and represented old ways of life about to be replaced by the process of renewal.

Not bad, this was starting to look promising, I thought, as we left after 15 minutes.

It faintly felt like Chinese New Year visits as we went from house to house, receiving ang-pows in the form of visual pleasure but not offering anything in return. I was hoping the artworks would be getting better, as we stepped into Liz’s home, taking off my shoes for the umpteenth time. A sense of modernity greeted me as clean furniture was well-spaced inside the immaculately-arranged home. We were led to the balcony that overlooked an area that used to be for bird singing competitions, now a semi-transformed garden with landscape architecture. That past was represented in the artwork, Sleeping Mata Puteh by Zhao Renhui, which a brown, white bird lying on a white background, and its ‘sleeping’ position symbolized the disappearing culture that used to be the life of the neighborhood now being replaced by a resurgence of trendy shops and lifestyle.[2]

I was unconvinced when I first saw the artwork that seemed forced into the whole context of the gentrification process. I decided to check out Zhao’s other works online to get a better idea of his style and motivation, and apparently, he bagged the Singapore International Photography Festival award in 2008 with a series of similar works, of animals against a white background. His projects produced forms and ideas about the zoological gaze, and they concerned themselves with the institutionalization, the archive and the mediation of it. He explained that the inspiration for his works came from trends in conservation and zoological research, which included how economic incentives shaped the appreciation of zoology and its preservation.[3]

The dominant white together with the fallen bird suggested poignancy, a sense of aloneness and of being left behind. On closer examination of an otherwise rather common-looking bird, its slightly downcast eyes and rather sullen expression as subtly captured in the photograph somehow related to a sense of reminiscence of the bird-singing days.  Having in mind Zhao’s interest in the development of the zoological gaze alongside social progress and mediation,[4] I felt that the emotional state of the artwork worked for me whereby Zhao has succeeded in capturing the laying-down position of the mata puteh in a way that conveyed the forlornness felt by old-timers of Tiong Bahru’s renewal process. I was still skeptical of whether the choice of subject matter fully represented the competitions as they could have pointed to, say bird conservation efforts of nearly extinct species, given the background of his works. In any case, though, the significance of the photograph was made clearer upon deeper introspection of the color composition and its accompanying emotional impact on the viewer, while the subject matter could have been made clearer with the addition of other objects, probably a broken cage or some spilled bird food container, or something that suggested to bird-singing, that would have made the intention of the piece more specific. I felt that if greater emphasis was placed on the relationship of the photograph to the bird-singing competitions, it would have made its visual impact stronger. 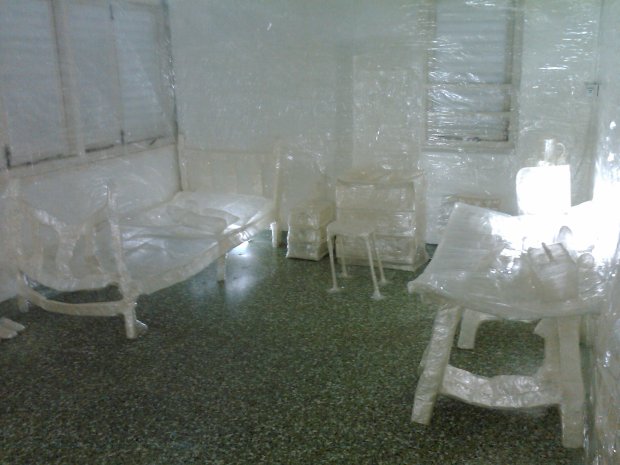 The sky turned from pale blue to reddish orange to dark blue as night fell. With tired legs and eyes, we reached the final stop of the tour which featured Jying Tan’s works, which were furniture made of cling-wraps inside a dimly-lit bedroom. The furniture represented her many home-moving experiences as a child, and the fragility and ‘temporary’ feel from the material choice suggested her lack of security in homes which was constantly changing.[5] The honesty and directness of the piece made it a successful one for me, firstly, because it did not force itself to strictly conform to evoking old Tiong Bahru, like many of the others, but drawing from a personal experience that gave it a more focused and personalized meaning.

Tan explained that she has much uncertainty and fear in her due to the constant moving, and art is the only element that is constant for her. The objects that she chose could have sentimental meaning or daily usage purposes. They were a platform that suggested to the audience the daily habits of the creator, and in the meantime, may be able to relate their own.[6] From my own house-moving experiences, the plastic wrappings suggested directly the tapes that movers used to wrap around large furniture pieces like television and sofa to be moved into the lorry. The material gave the installation a strong sense of impermanence and the accompanying feelings of loss and uncertainty, as one braces himself to adapt to a new environment elsewhere. However, I felt that the individual objects did not suggest sentimentality to the viewers as the objects seemed rather similar to each other and did not relate to me on their own. As a whole, the wrappings and the light coming from the side of the wall, and the dim atmosphere evoked feelings of the just-moved-in enigma and uncertainty that Tan was trying to convey through her own experiences, and it related to my own as well. If Tan had highlighted the objects that meant more to her and represented her daily habits, she could have used a different color for them, like cellophane paper, or things that were really unique and personal to her, so that they could have been more significant.

In retrospect, most of the artists’ works reflected, to certain degrees, the feelings of nostalgia of the long time residents of Tiong Bahru from different angles; the temple, of worship and Chinese tradition; the mata puteh, of bird-singing competitions that added life to mundanity; and the wrapped-up furniture suggesting temporality and the moving-on of life. I must admit the cynical side of me as I prejudged its quality, especially after my unglamorous entrance to the place and initial lack of thoughtfulness to some of the pieces. For example, I had research on Zhao’s other works to fully comprehend his intentions and meaning of the Sleeping Mata Puteh. Upon closer analysis, the works did fulfill what the artists intended in their executions, but greater emphasis could have been placed on the positive aspects of the renewal process, which happened to many areas in the midst of the nation’s progress, such as the introduction of the young culture and their voice that brought vitality to the aging community. As the oft-repeated cliché goes, “change is the only constant of life”, I believe that when we embrace change and its accompanying positivity, it would lessen the sense of loss and reminiscence of past ways of life that was the major theme of most art pieces, and would have brought a new dimension to the art show.